Most IT projects fail – Keys to making a success of yours

I heard of a company chose an ERP solution to facilitate their core business. The contract value was of 4 Mio $, and implementation was due to end by June 2016. Today (in March 2017), they already had to sign for an additional change of 1 Mio $, and the project is completed at only 60%. Most likely, the project will end up with schedule and financial overrun of 2x of the initial contract.

Sadly, this story is not unique. In fact, experts tell us that the majority of IT projects fail. Although their figures vary, they range project failures between 60 to 90%. 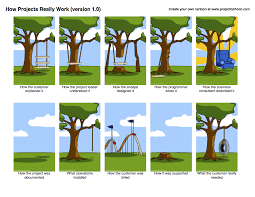 Striking to me is that those figures did not change much over the last three decades.

What happened, and what did companies actually do about it?

First, back in the ‘90’s, companies tried to improve the skills of their own IT employee. This resulted in uncompetitive internal IT costs. Thus, this initiative died out.

Then, the trends became to strengthen IT procurement to obtain 10% savings. Thus, they pressured their IT providers mostly on prices. At first, this seemed quite successful, but all too often, this resulted in nightmare projects. Actually, today some are still pursuing this approach, with poor results.

Others opted to outsource their IT, especially because of the promise of a .ca 20% cost reduction. This ended in yet another failure, as IT providers did not take ownership in their clients’ needs.

Some companies are good at managing their IT sourcing

Yet, some companies are doing better.

How do they do that?

First, probably that successful companies are making use of all of the above, but are never abusing of any of them.

Second, they apply a simple rule: the secret of good preparation.

The supreme way to a successful Project

What I state here may seem a little simplistic, but follow through…

To succeed in an exam, in sports, in a job interview, etc. we all know that what is needed most is “preparation”.

About 50% of success lies in the preparation phase

But, only successful companies practice it, and thus gained the best competitive advantage.

So what does preparation mean?

Having reviewed over 8’000 proposals, I can tell that preparation is usually not that time consuming (sometimes, 2 hours will be sufficient).

But it takes one key driver:

Have a proactive mindset

The guaranteed outcome will always be improved efficiency!